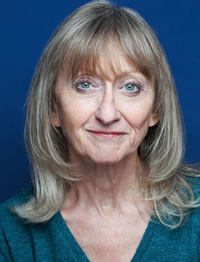 Flip has had a wide and varied career spanning over thirty years performing in theatre, radio and cinema as well as writing. Her credits include the acclaimed BBC radio 4 series ‘Cabin Pressure’ and the 2005 BAFTA award winning ‘Harry Potter and the Goblet of Fire’.
She was most recently seen in ‘The Musketeers’, ‘The Lost Honour of Christopher Jeffries’, and ‘Jonathan Strange and Mr Norrell’. Other work includes Silk, Wallander, Doctors, Holby City and New Tricks. She has appeared in many comedy programmes on TV and radio such as Giles Wemmbley-Hogg Goes Off’. Flip played the school secretary in Grange Hill for 2 years and returned to children’s television last year with Gigglebiz on CBeebies.
Flip’s acclaimed show, Flipside, ‘Through this one woman flows the gritty realism of a Ken Loach film suffused with belly laughs….a tragic-comic triumph’ (The Scotsman) played twice at the Gilded Balloon in Edinburgh, the same venue she returned to with Maggie to perform WOAUA in 2013. Flip is a veteran of impro including a 7-year residency at The Gate Notting Hill. 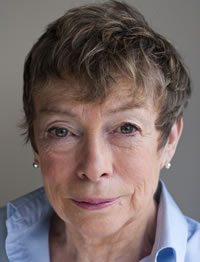 Maggie started out with the intention of being an opera singer but, after 2 years in the D’Oyly Carte Opera Company, decided that getting laughs was more in her line – so she went into Oh Calcutta! in the West End. Since then she’s been in many comedies and musicals, plus repertory and fringe theatre. She’s toured extensively in this country and abroad, including trips to South Africa, Zimbabwe, Lesotho and New Zealand. Other West End appearances include as Mai Bombler in The Blue Angel at the then Globe Theatre and Mimi in ‘Allo ‘Allo at The Palladium.
In recent years, Maggie has hugely enjoyed working with double act, Topping and Butch and she has done the Edinburgh Fringe, Leicester Comedy and Brighton Festivals – as well as several gay pubs. She’s also been running her own business for the last eighteen years, providing audio versions of information for disabled people.
Maggie had done some writing prior to working with Flip but says it’s great to have the support of a fellow writer/performer, especially one who shares the same sense of humour: for her, it’s still all about laughs!